New Delhi (CNN)Lata Mangeshkar, the “nightingale of India” who gave her voice to Indian movies for more than 70 years, was honored at a state funeral Sunday, after she passed away at the age of 92.”Lata Di died at 8:12 a.m. due to multi-organ failure after over 28 days of Covid-19 diagnosis,” Dr. Pratit Samdani, Mangeshkar’s doctor, told reporters outside Breach Candy Hospital.Indian prime minister Narendra Modi paid his respects to Mangeshkar at the funeral, according to a post published from his verified Twitter account. 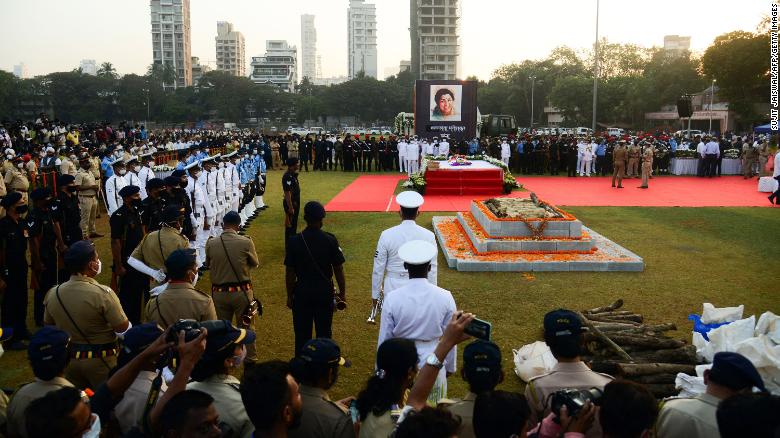 The mortal remains of Bollywood singer Lata Mangeshkar, draped in the national flag, during her funeral ceremony at Shivaji Park in Mumbai on 06, February 2022.The Indian government has ordered two days of national mourning for the late singer. The national flag will be flown at half-staff from Sunday through Monday, India’s Ministry of Home Affairs said in a statement Sunday. “There will be no official entertainment,” the ministry added.Mangeshkar was a playback singer — providing music to be mimed by actors — for innumerable Indian movies. Her soft voice, which could attain a high pitch with an unsurpassable ease became a part of almost every Indian household. 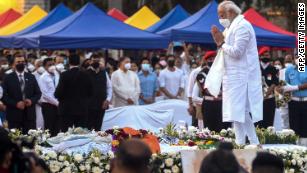 India’s Prime Minister Narendra Modi (R) attends the state funeral ceremony of late Bollywood singer Lata Mangeshkar who died in Mumbai on February 6, 2022.Indian Prime Minister Narendra Modi said he was “anguished beyond words.””The kind and caring Lata Didi (sister) has left us. She leaves a void in our nation that cannot be filled,” he wrote on Twitter Sunday. “The coming generations will remember her as a stalwart of Indian culture, whose melodious voice had an unparalleled ability to mesmerise people.”Bollywood actors and Indian politicians paid tribute to the late star Sunday.”How can one forget such a voice! Deeply saddened by the passing away of Lata Mangeshkar ji, my sincere condolences and prayers,” wrote actor Akshay Kunar on Twitter.MP for the opposition Congress party Rahul Gandhi also offered his condolences in a tweet. “She remained the most beloved voice of India for many decades,” he said. “Her golden voice is immortal and will continue to echo in the hearts of her fans.”Pakistan’s Prime Minister Imran Khan also paid homage to the singer in a tweet. “With the death of Lata Mangeshkar the subcontinent has lost one of the truly great singers the world has known. Listening to her songs has given so much pleasure to so many people all over the world.”From the age of 5, Mangeshkar began training with her father in classical Indian music. Her father, Deenanath Mangeshkar, was an accomplished classical singer and stage actor. His daughter began her career by singing at his musical plays.Mangeshkar performed in public for the first time when she was just 9 years old and recorded her first song at the age of 13. A month after she recorded her first song, her father died. Left to support four younger siblings and her mother, Mangeshkar began to work in the Indian film industry. At first, music directors dismissed her, saying her voice was too thin and sharp. By 1948, she was lending her voice to half a dozen movies. 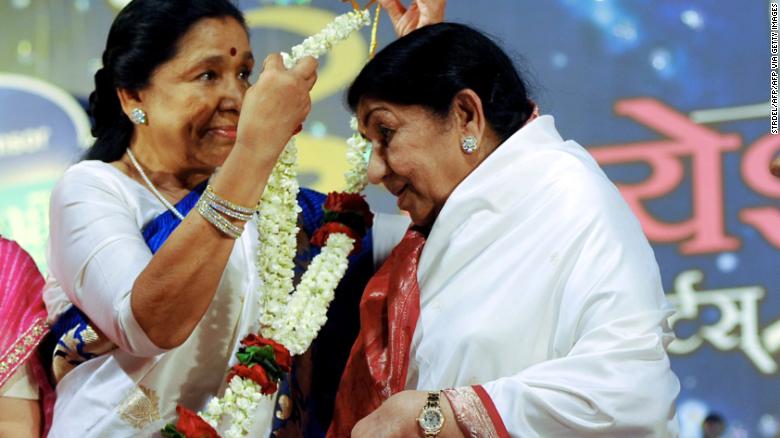 Indian Hindi and Marathi language Bollywood playback singer Lata Mangeshkar (right) is greeted by her sister Asha Bhosle during an awards ceremony in 2013.

Voice of the movies

Mangeshkar was born on September, 28, 1929 in Madhya Pradesh. Due to her father’s reputation in the classical music scene, she was introduced to several composers, like Aman Ali Khan, who mentored and trained her for several years.As her career took off, Mangeshkar delivered consecutive hits which made her one of the most sought after playback singers in the country. In Indian movies, it is standard practice for a music director to insert eight to 10 songs that play out in synchronization with the film plot.Singers like Mangeshkar were hired to record the songs in advance and to which actors would lip sync or a sequence would play out on screen. Unlike Hollywood, where artists record albums and that music is procured for a particular movie, in India, singers generate music and lyrics for the movie exclusively.Her break came in 1949 with the movie, “Mahal,” for which she sang the tumultuously famous song, “Aayega Aanewala.” She won her first filmfare award for the song, “Aaja Re Pardesi” in the movie, “Madhumati” in 1958 and her first national film award in 1973 for the song, “Beeti Na Bitai” in the movie “Parichay.”She gave her voice to the music and lyrics penned by great composers and lyricists of the time like Madan Mohan, R.D. Burman, Gulzar and A.R. Rahman. Music directors stalled their projects to accommodate her tight schedule and composers wrote their music with her voice in mind.She also sang, “Aye Mere Watan Ke Logon,” a song meant to inspire the people of the country after the Indo-China war in 1963. It became an anthem with Mangeshkar beseeched with requests for it at every concert. 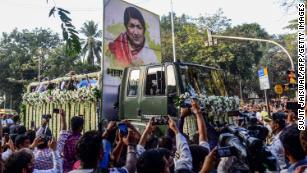 People gather to catch a glimpse of the funeral procession of late Bollywood singer Lata Mangeshkar who died in Mumbai on February 6, 2022.In 2001, she was awarded the Bharat Ratna, the highest civilian honor in India. She was also awarded the Padma Vibushan in 1999, the second-highest civilian award in India. Mangeshkar has performed in over five languages for different movie industries within India.In an interview with a news channel in 2009, Mangeshkar expressed one regret. “I was very keen to become a classical singer. But when I began work, I had so many responsibilities that I could not pay attention to classical music. I did not have time to practice,” she said.Mangeshkar lent her voice to more than 1,300 movies and sang over 25,000 songs. Her music has been used in Hollywood films like “Eternal Sunshine of the Spotless Mind,” “Life of Pi,” “Lion” and “The Hundred-Foot Journey.”Over the past two decades, Mangeshkar had slowly reduced her workload to just a couple of movies a year. Preferring to stay out of the limelight, she rarely spoke about her personal life.

In an in interview, Mangeshkar was once asked what contributed to her success as a playback singer.”Natural talent contributes about 75% and the rest is hard work, practice and eating-drinking restrictions,” she said. “I don’t do the restrictions … I have just been singing all my life.”

How to Organize Your House Renovation Schedule

You may have missed

The 5 Secrets to Banishing Deep Wrinkles and Baggy Eyes

What Treatments Are Available For Krabbe And Gaucher Disease Symptoms